This one’s probably going to wind some people up, but I’m writing it anyway. Today I’m talking about how to grow your blog without being irritating. It may come as a surprise to some readers, but actually, blogging isn’t an easy gig. There’s a lot of work involved, and I’m not just talking about actually creating good writing.

It’s not enough to just create engaging content. Although to be honest, that is the foundation of any good blog or website. However, great output alone isn’t going to keep the wolf from the door. Blogging involves a lot of peripheral effort, and today I’m going to discuss how best to do that without getting on the nerves of your fellow writers.

The writing of great blog posts is one thing, but how do you get people to actually read them? If anyone knows the magic answer to this one by the way, please let me know in the comments!

All jokes aside, your blog won’t grow without readers. And to gain readers, you’ve got to put your work out there. I’m talking promotion, or more specifically, self-promotion.

How To Grow Your Blog When You Suck At Self-Promo

This isn’t easy for some people, myself included. I’m absolutely horrendous at sharing and promoting my own writing. I’ll do it once in a blue moon, and as a result, I probably haven’t cultivated the readership I could have done yet.

But on the other side of the coin, there are those out there in the blogging and writing community who have no problem with sharing their content. Oversharing, then sharing again and then chucking it out there once more for good measure. This is equally problematic.

It’s key to try and find the right balance between effectively promoting your work, and irritating the life out of everyone by constantly sharing your stuff. I’m no expert, but there’s nothing that turns me off a blog faster than someone who constantly spams their own content without any effort to engage or behave like a human being about it.

Anyway, if you’re interested in finding out how to grow your blog without being irritating, keep reading.

Make sure you share your blog posts on social media. This is key to raising awareness that your website exists, and will hopefully drive traffic your way (if your content is interesting enough). Share with care though, and make sure you don’t get annoying with it (as per my next point).

Spam the life out of all of your social platforms at the same time. By this I mean no matter how tempted you are to post your shiny new article everywhere at once, don’t. Be thoughtful of your audiences; not everyone will appreciate seeing the same post come up in their feeds on Facebook, Twitter, Instagram, LinkedIn, WhatsApp, Pinterest, MP3 player, landline phone and bloody TV set all at the same time. Think about how annoying that is when you see it. Got it? Ok, good.

Share your content more than once. It’s no good tweeting a link and then sitting back waiting for the views to roll in. After about 15 seconds, your tweet will have disappeared into the void of the Twittersphere, never to be seen again. It’s absolutely fine to share your posts more than once, in fact, it’s something you need to do.

Spam the same bloody post over and over on an almost hourly interval. Or even a variety of posts. It just looks like you don’t care who reads your stuff, as long as it’s thrust under everyone’s noses on a constant basis. It smacks of over-automation and frankly, is one of the most irritating things to do as a digital creator these days.

Take the time to network with other bloggers and writers in your online communities. This is so important. You need to grow your network of peers as well as cultivate a readership and a following. Mainly because it’s hard work being on your own out there in the gig economy, but also because you’ll gain a lot of valuable insight and advice from within the blogging world. You’ll probably make some really good friends too, and that’s always a great thing.

Create or get involved in ‘comment pods’ or group DMs with other bloggers or writers. Honestly, this is just a recipe for disaster almost each and every time it happens. Invariably people end up annoying each other the sheer volume of messages, the comparing/competitiveness or the inevitable descent into bitching about other blogs not privy to the chat. We’ve all done it or seen it; anyone who says they haven’t is just lying. Plus, some people are just irritating, there’s no getting away from that.

Anyway, comment pods and group DMs encourage a lazy kind of faux- engagement in your work, and nine times out of ten all that happens is that you end up with 15 comments that all say roughly the same thing on your post, and serve no real purpose other than to make it seem like you’re more popular than you actually are. Be authentic, read and engage with the stuff that interests you and others will (or should) do the same for you.

Know when to resurrect old posts. Sometimes you’ll write something and then completely forget about it as time passes. So will your audience. I’m really guilty of doing this! Don’t be afraid to re-share your old posts online from time to time. Those who have already ready them may re-read and enjoy, and those who haven’t seen them before will do now.

Share old stuff that is actually just a bit dull now. When you first start blogging there’s a bit of a learning curve. It takes time and effort to refine your work. Getting it right is vital for growth, so don’t be afraid to ditch the things that aren’t a good fit anymore. Know when to go back through your old catalogue and edit or cull the posts that you’re not that amazed by now. There’s nothing wrong with a bit of self-editing – don’t just share everything you have if it isn’t your best work.

Act like a human being on social media. There is nothing worse than someone who is just sharing their posts without any attempt to chat or behave like a person. It looks beggy, and more importantly, it undermines any potential for you to grow as an authority online. By that, I mean that you cannot improve your social standing or trustworthiness if you’re constantly shouting ‘notice me, notice me!’ without any effort to engage in conversation.

Be false in the hope it gets you more work or attention. Be yourself. If you’d normally say ‘shit’ in real life then don’t say ‘shucks’ on social media. Yes, it’s important to present yourself professionally, but I think it’s equally important to present yourself as a human being. The minute you start creating a persona or acting like someone you’re not, you’re going to run the risk of alienating your readers. Know why? Because your readers are bloodhounds. They can smell the scent of bullshit from a thousand miles away, and they aren’t going to stick around to keep inhaling fake fumes.

Take care of your followers. Talk to them, make an effort to interact with them. Especially as they’re taking an interest in you and the work you’re putting out there. They don’t have to do that, you know? Make the effort to engage with the people who read your blog and who follow you on social media. Plus, it’s just polite, isn’t it? Nobody owes you their time just because you write stuff on a website and put it out there for people to read, so be nice to the ones who do.

Buy followers, obsess over follower numbers or follow to unfollow. It’s the ultimate in fake moves, and if I need to explain to you why any of these things are fake moves then I’m afraid you’re not going to last long out here in the freelance world. There are still people who do this, and it never ceases to amaze me that they don’t think it’ll get found out. It’s not a crime, of course, it’s just lazy and entitled, and it undermines the hard work and effort that people actually put into their work without cheating.

How to grow your blog without being irritating

So there you have it, a quick and dirty guide to how to grow your blog without being irritating. What would be your suggestions to add to this list?

There’s bound to be some points I’ve missed out here. If you’ve got any thoughts, please do leave them in the comments below. Also, you can reach out to me over on Twitter (once I’ve spammed this post out there a few times!) if you’d like to. 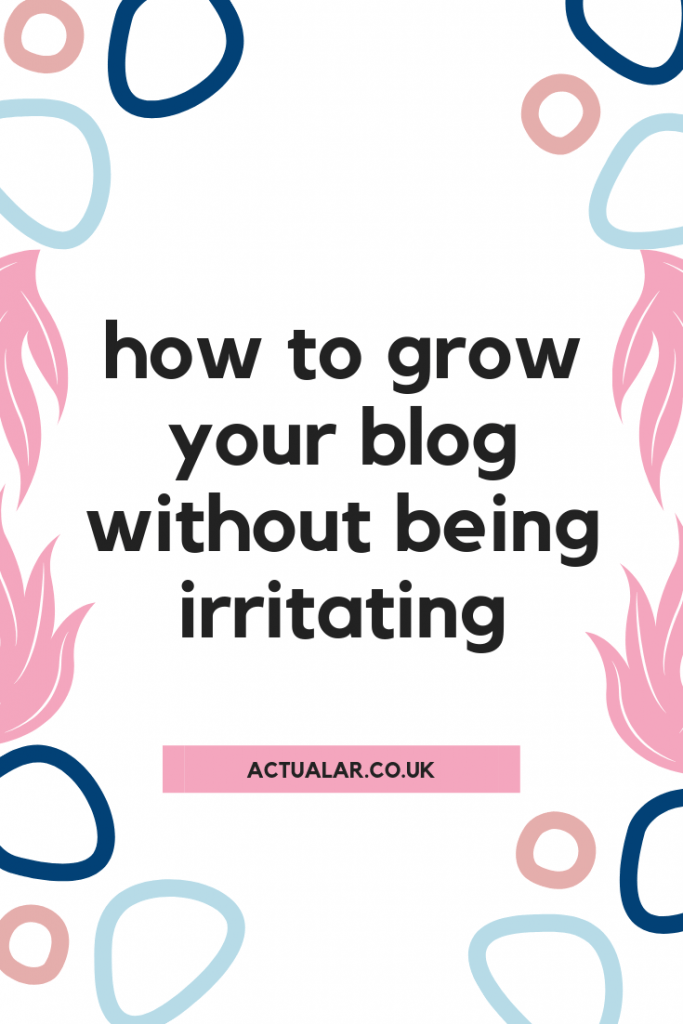 6 thoughts on “How To Grow Your Blog Without Being Irritating”